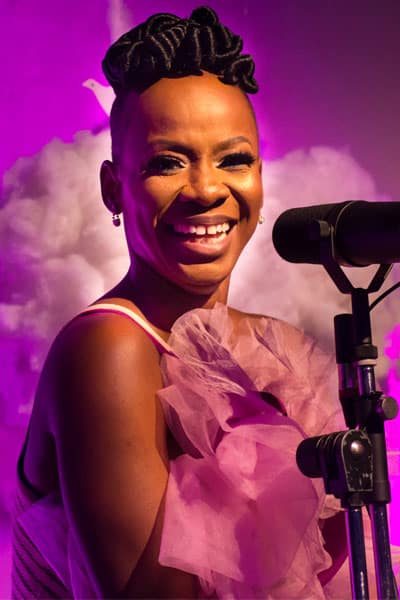 Titilope Sonuga is a writer, poet, playwright and performer whose work grasps moments of tenderness and persistent joy at the intersection of blackness and womanhood.

She is the author of three award-winning collections of poetry, Down to Earth (2011), Abscess (2014), and This Is How We Disappear (2019) and has composed and released two spoken word albums, Mother Tongue (2011) and Swim (2019). Sonuga has written three plays, The Six; an intergenerational exploration of womanhood, Naked; a one-woman play and Ada The Country, a musical. She has scripted global advertising campaigns for brands including; The Bill and Melinda Gates Foundation, Google, Intel Corporation, Guaranty Trust Bank and The MacArthur Foundation.

She was a writer and actor on the hit television series Gidi Up, which aired across Africa. Her writing has been translated into Italian, German and Slovak. Sonuga is the 9th Poet Laureate of the City of Edmonton.